A Place For ALL Adult Industry Performers

This is a forum for general topics about the cammodel industry. Open to all members.
Post Reply
1 post • Page 1 of 1

Today camsite Streamate sent out emails to all cammodels in California ahead of assembly bill no. 5 going into affect on Jan. 20, 2020. In the email Streamate a camsite based in Seattle a heads up on what to expect after the new year. It appears they have decided to release any model who resides in the state of California from their contracts if they fail to join a third party studio before time is up. I wonder if it's Studio20 they're working with? They've expanded quite a bit and are now working Los Angeles as well as Europe. This is pure speculation. 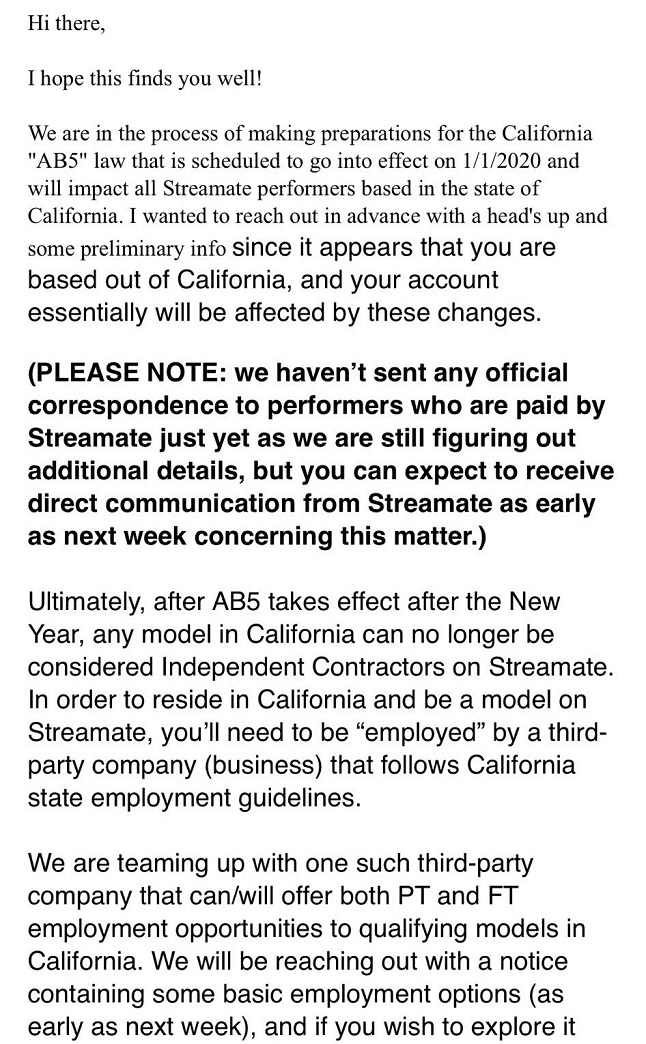 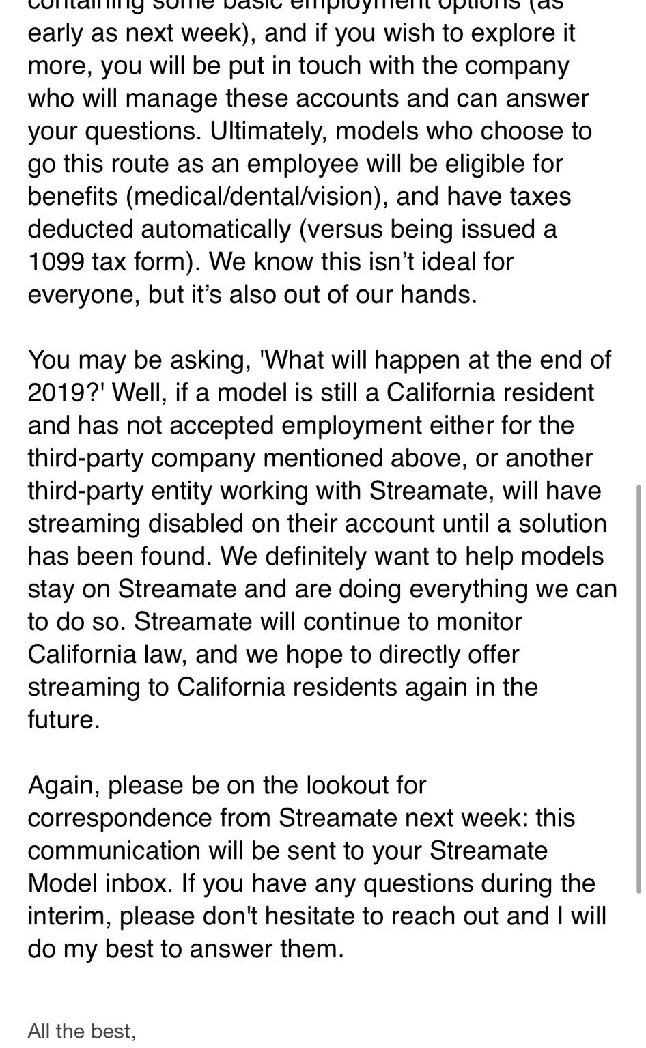 What Is California Assembly Bill 5?


California Assembly Bill 5 or AB 5 is a California law which limits the use of classifying workers as independent contractors rather than employees by companies in the state. Employees are entitled to greater labor protections, such as minimum wage laws, sick leave, and unemployment and workers' compensation benefits, which do not apply to independent contractors.[1] Concerns over employee misclassification, especially in the gig economy, drove support for the bill.

California Labor Code, and, as a general rule, puts the burden of proof on employers to show that a worker is properly classified as an independent contractor where all three of the following conditions are met:

-the worker is free from the control and direction of the hirer in connection with the performance of the
-work, both under the contract for the performance of such work and in fact
-the worker performs work that is outside the usual course of the hiring entity's business
-the worker is customarily engaged in an independently established trade, occupation, or business of -the same nature as the work performed for the hiring entity.

Proponents of the bill said it would give workers previously classified as contractors minimum wage, overtime, sick leave, unemployment and other benefits, and prevent the state from losing $8 billion from payroll taxes that independent contractors and companies who use them do not pay and social benefits required due to lower pay. Opponents said it would increase labor costs by up to 30%, create higher costs for customers and reduced service, and reduce flexibility for workers.

This discussion has been going on for a few months within the cammodel community but most were unsure of how this would turn out. It doesn't even appear that Streamate knows for sure but just decided to dump them. It's probably easier for them to not have to deal with the situation. I for one can not wait to see what the third party agreement they're cooking up entails. It's definitely causing a lot of Twitter chatter at the moment. It appears that some California models are only just now hearing about California Assembly 5, how is that possible?


Becoming an employee is going to be very difficult for some models especially those who are high earners. This means they may have to keep a regular schedule and could possibly miss out on additional money due to their work hours becoming regulated. But then on the other hand this may turn out to benefit those who aren't high earners and could use a more structured setting. Those models would need to qualify for the new employee standards regarding hourly payments plus benefits. I have so many questions regarding this bill and how it's going to impact the adult industry. Based on that message it doesn't sound like Streamate is opposed to models joining other studios on their own, however it would come down to if the studio can afford the overhead.

Here are few things that any studio would need to look at when employing Californian models. Would they be able to employ them full time or half time?:


Some employers in our state will classify all workers who put in at least 32 hours each week as a full-time employee.

However, other companies deem all workers who average fewer than 40 hours per week as part-time employees. As a general matter, California law leaves this question in the hands of the employer.

However, the question of how many hours is part-time in CA is more complicated than that. If you work at a company with 50 or more total employees, then the Affordable Care Act (ACA) will have an impact on your designation — at least for the purposes of health coverage.

The ACA defines ‘full-time’ work as 30 hours per week. If you are covered by the ACA, then your employer must either provide you with sufficient healthcare benefits or it must pay a penalty directly to the government.

Most companies in this situation choose to offer health coverage. Of course, this ACA regulation does not apply to small employers.

It should also be noted that California is one of the few states with a paid leave law on the books. For companies covered by this law, paid leave benefits to apply to all of their workers.

Part-time employees will accrue paid leave benefits under this law just the same as do full-time workers.

If you believe that you were improperly denied access to your paid leave benefits, or any other employment benefit, you should contact a California wage and hour lawyer right away.

HOW DOES BEING A PART-TIME EMPLOYEE IN CALIFORNIA AFFECT YOUR LEGAL RIGHTS?
The rights of part-time workers must be protected. As explained by the United States Department of Labor (DOL), part-time employees are still protected by labor regulations in much the same way that full-time workers are.

For example, the Fair Labor Standards Act (FLSA) simply does not consider whether a worker is part-time or full-time.

Part-time workers are still owed a minimum wage, and, should a part-time worker be scheduled for more than 40 hours in a single week during a busy time of the year, they may be entitled to overtime pay.

To be clear, employers are under no obligation to offer part-time workers general benefits. California companies typically have the right to award benefits only to their full-time staff members.

Other platforms based in California who have yet to speak in any great terms on California Assembly Bill 5 are Niteflirt and Chaturbate.

Return to “The Lobby”

Powered by phpBB™ • Design by PlanetStyles